This is what happens when you call someone’s wife a whore and yell Sieg Heil. He had it coming. EPIC BEACH FIGHT! 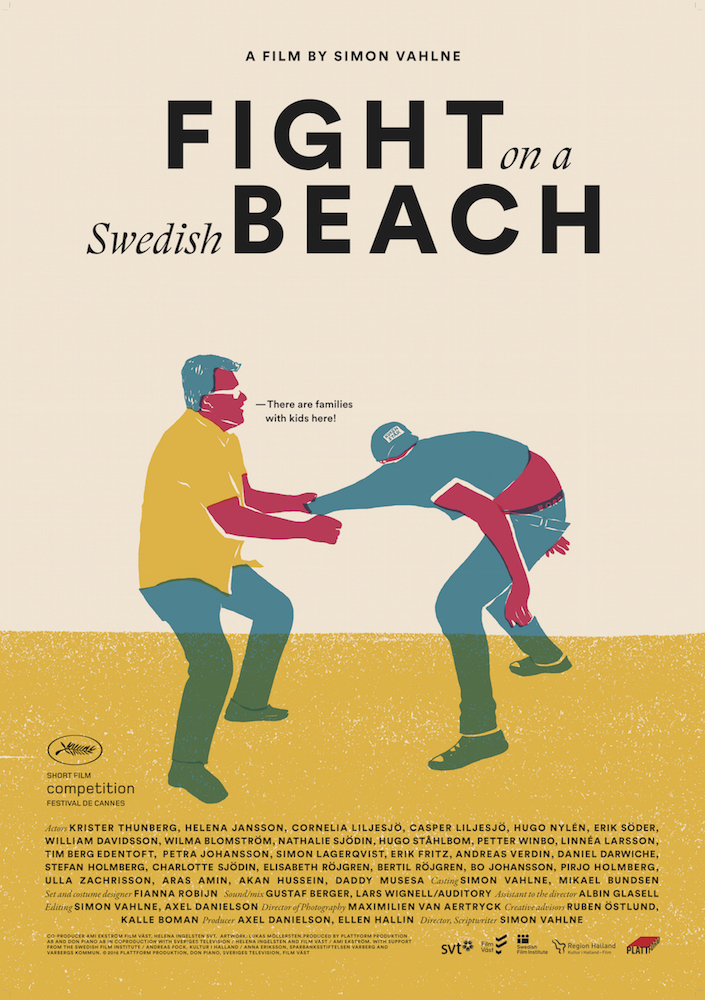 GFM: Please introduce your film to our readers as most of them will not yet have seen it.

Simon: It’s a film about a conflict that takes place on a beach, which I think the title gives away. Some semi-drunk teenagers yell “sieg heil” and all the sunbathers, naturally, get very upset. People want to go tell the kids off, but no one’s really up for the job.

GFM: Your film raises interesting questions as far as the ethics around what is acceptable behaviour in public and also how society disciplines young adults, or children. Can you comment on that?

Simon: This situation on the beach, with drunk kids doing nazi salutes and bothering everyone, happened to me and my family when I was a kid. I remember my mum and dad sitting in the sand arguing about whether someone should confront those loud teenagers or not. My mother wanted to summon up some people and go talk to them. My dad thought it better to just ignore the whole thing and not give any attention. I’ve always remembered their conversation and how scared I was that they would get involved in some kind of fight. It must have been very stressful for them – it must have been a very tricky situation. And tricky situations are interesting, and important, to try and capture with a camera. 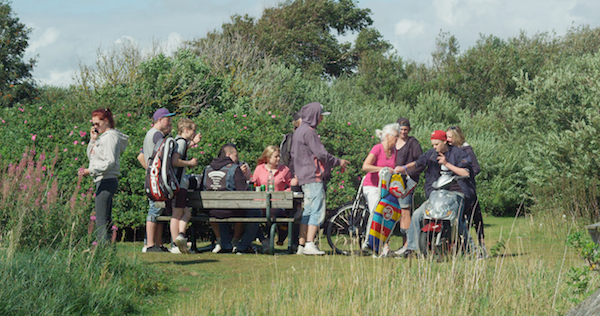 GFM: Yes, and you have an interesting way of shifting perspective in the film.
Simon: Yes, in real life, no one ever confronted those kids. My dad got his way, I guess, but filming this event, I wanted to see what it could have looked like had some adults actually done so. What ends up happening in the film is what I think my dad feared – that someone loses their temper and tries to discipline the kids by being threatening and angry and, ultimately, by using violence and starting a fight on a Swedish beach.

GFM: You had quite a few speaking roles and many extras in the film. Can you talk a little bit about your actors and the production process?

Simon: Fight on a Swedish Beach is very much an ensemble piece – we have over 30 speaking roles. Pretty much everyone is an amateur and has never been filmed before. My former neighbour Bertil is in it – he rips a teenager’s t-shirt to shreds. My friend’s mom Ulla has a big part as a watercolour artist who gets very angry when the kids steal an ice-cream clown from a kiosk. I bumped into the teenagers in a parking lot. They were playing really loud, annoying music from their EPA tractor and I thought “perfect”!
With so many actors involved, the production was rather complex. We planned each shot carefully and tried to create a space where the actors could improvise and move around freely. I wanted the film to feel very authentic – I felt it would be more intriguing to watch if you felt like it’s all actually happening for real. That’s why I wanted to work with Axel Danielson – the film’s executive producer – and Plattform Produktion. The people at Plattform seemed interested in reflecting reality. I knew Axel would make me work very hard to make sure I did so. 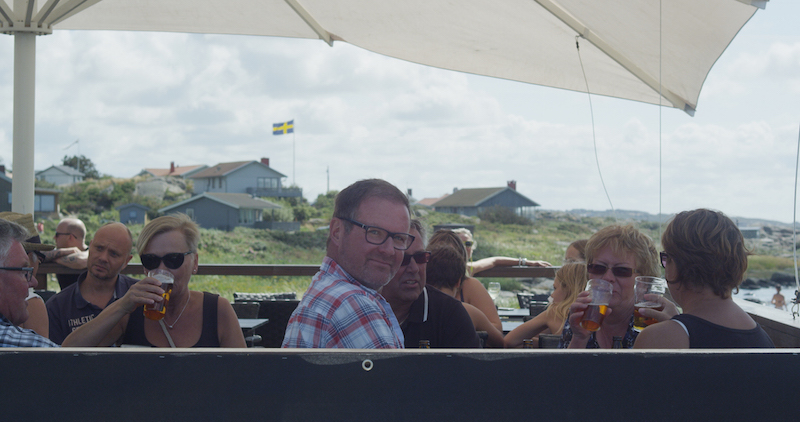 GFM: Please tell me a little bit about your background and the arc of your career. I understand you started out as an actor and worked in L.A., then you went to film school in Prague and now you’re directing films and commercials in Sweden.

Simon: Yes, I started out in Los Angeles where I studied acting – I was a drama major in college. Then I spent a year at Prague Film School and eventually graduated with a masters from the Valand Film Academy in Gothenburg. That’s where I met Axel and Maximilien van Aertyck, who is the film’s DP and a very important collaborator in the making of this film.

GFM: I’d love to hear about your collaboration with Maximilien.

Simon: Max is very good at shooting social contexts. He is good at framing human behaviour, plus he’s a good director. On the actual shoot, we talked a lot about the acting and came up with lines for the actors, etc. So he’s not a DP in the “traditional” way, as in someone who only cares about the shots.

Max is also someone who is very, very scared of clichés. He kept an eye on me and made sure I didn’t redo something that had already been done. That’s extremely important when you make a film in the Swedish archipelago – many people have done so before. 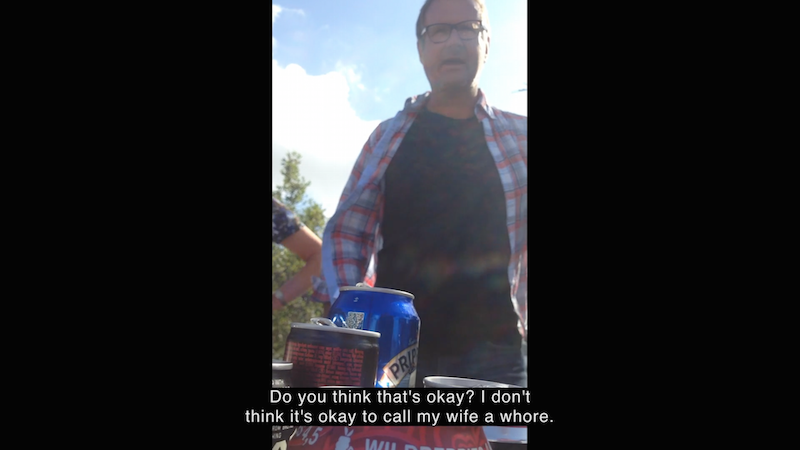 GFM: Can you share some of your thoughts on the short film format in general, or your experience with short films and the place they play in your career?

Simon: I think it’s easier to be progressive when making a short, because there’s isn’t as much money involved as with longer formats. You don’t have anyone breathing down your neck who’s worried about ticket sales and wants you to play it safe. So in that sense, the avant-garde is where the shorts are. 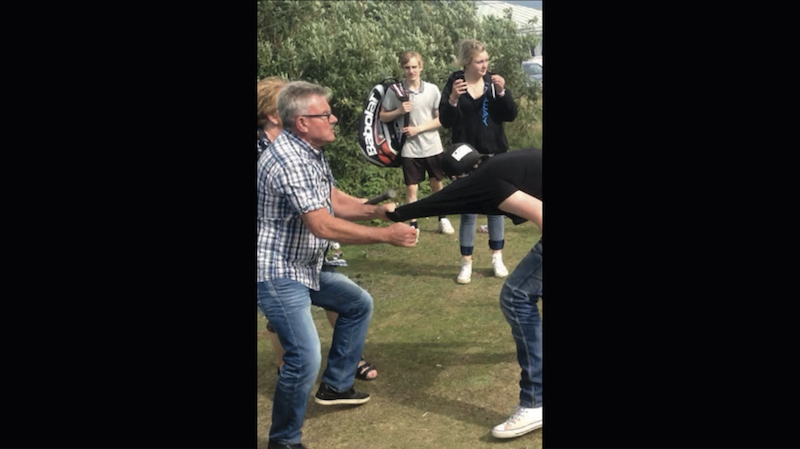 GFM: Lastly, what does it mean to you to have been selected for a Palme d’Or?

Simon: Well, I can’t wait to show the world what a fight on a Swedish beach looks like and Cannes is the perfect place to do this! Also, the nomination gives me a lot of energy to start working on my next project.